UNITED KINGDOM / AGILITYPR.NEWS / May 03, 2021 / Low-income workers who own shares in the company they work for enjoy a £10,000 “wealth premium”, new analysis shows today.

The Social Market Foundation found that employee share ownership plans can allow workers on low wages to accrue far more in assets than others on similarly low incomes.

Less than 5% of all workers currently benefit from such plans and the cross-party think-tank said ministers should take steps to encourage companies to offer share plans, and to promote their benefits to workers.

Under current tax rules, companies are currently able to offer employees a limited number of shares either free or for purchase well below market prices. Over 14,000 companies in the UK operate some form of tax-advantaged employee share ownership plan, including BT, Tesco, Whitbread, and Greggs.

In a report on employee share ownership, the SMF found that workers who can take advantage of such offers have much more substantial financial assets than people in similar income brackets who do not or cannot take a stake in their employer.

While it might be expected that people who own shares would have greater wealth than those who do not, the SMF found the wealth effect of employee share ownership is clear even between people in similar income groups. That suggests that employee shares give a significant boost to wealth, the report said.

Employee shareholders in the lowest income quartile – the poorest 25% in the UK – have median net financial wealth £10,900 greater than those that are not employee shareholders, the SMF calculated. (See Notes for details on data.)

For younger workers on low incomes, the advantages associated with employee share ownership are stark.

For the poorest half of people aged 35 to 44, wealth was £450 among those who are not employee shareholders. But for those who do own shares in an employing company, wealth was £8,835, a difference of £8,385.

SMF analysis of Bank of England Survey data from 2019 suggests that, among households in the bottom income quartile, the median amount saved each month is just £12. Close to half – 47% – were saving nothing from their income each month.

Furthermore, close to a third (31%), had no savings in the bank that they could draw upon in an emergency situation.

“Too many people on low incomes struggle to build up savings and wealth that can help them weather tough times and enjoy financial security. This evidence suggests that employee share ownership is associated with much greater wealth and security for people in low-income groups.

“Giving more workers a chance to own a stake in the company they work for would be a good way to build back better after the pandemic.”

“Our members have been aware of the benefits that participating in share schemes brings to employees for many years. These plans need to keep pace with changing work expectations for the benefits to be more broadly accessed. This is particularly true for younger people who are put off by the length of commitment required to their employer. Government should look again at whether rules set decades ago reflect current employment patterns and take action to prevent ambition being penalised.

“With the increased focus on the role of stakeholders in corporate reporting, this report provides compelling evidence that doing right by their workforce is not only doing right by society but also brings valuable productivity benefits for companies of all sizes.”

The report found several factors are holding back employee share plan participation, recommending a range of interventions to encourage their use.

The barriers to uptake include a lack of awareness of the benefits of ownership, as well as “risk aversion” and the requirement to stay with the same employer for a minimum of five years to realise maximum plan benefits. For employers, the cost of administering share plans and the complex accounting rules for their use can be a deterrent.

To widen participation, the SMF propose that the Government launch a new Employee Ownership Commission to promote share plans and their use. Other changes should include requiring companies to publish more information about employee share plan use, and offering workers who own shares a chance to sit on Employee Advisory Panels with a say on company management. (See Notes for full list of recommendations.) 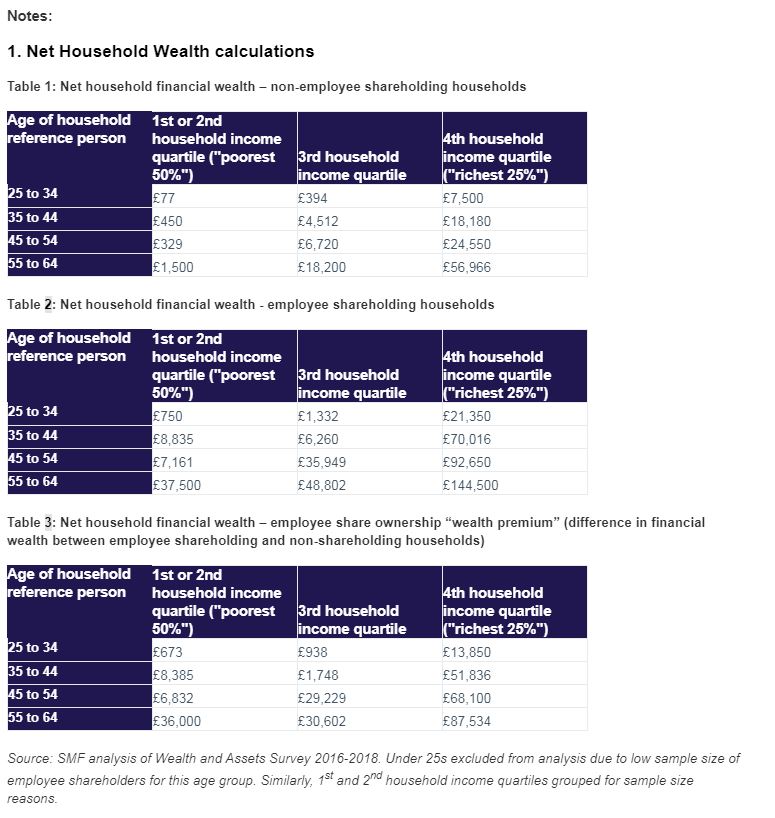 1. The Audit, Reporting and Governance Authority (ARGA) - the Financial Reporting Council’s successor - should require firms to include information on what type of employee share ownership plans are operated, the extent to which each plan is taken up by eligible UK-based workers and the average value of employee shares in annual reports. This information should be reported regularly and in standardised form, for the use of investors pursuing an ESG agenda and seeking more information about companies’ social and governance performance.

2. Government should explore the role that public sector procurement rules could play in encouraging wider rates of employee share ownership. Companies that are able to demonstrate how they share success with employees - such as through share plans - could be looked upon more favourably.

3. The ARGA should undertake a review of the accounting treatment of SAYE share plans, which currently disincentivises their implementation. In particular, consideration should be given to the current treatment of cancellations by plan participants, which sees expenses brought forward even though share options will never be exercised.

4. The Government should decrease the holding period of Share Incentive Plans from five years to three years to reflect modern trends in job tenure

5. Those that voluntarily leave a company before the end of a share plan contract should be entitled to tapered tax benefits. They should not be treated as “bad leavers”, as is the case at present.

6. Gig economy workers should be allowed to participate in tax-advantaged share plans.

Getting lower income workers on board

8. Given the need to improve financial resilience among lower income households in the UK, government should consider the case for supporting a modest rate of interest or matching funding on SAYE savings, or provide focused financial incentives to lower income employees. Lower income workers could also be offered greater SAYE option price discounts.

The SMF has argued elsewhere that government support for savers is currently poorly focused. For example, ISA tax reliefs disproportionately benefit higher earners. We have argued that financial support should be focused on lower earners and those of limited financial resilience. Government-provided match savings for lower earners participating in SAYE, and other corporate savings schemes, would be one way of doing this.

9. The Government should lift the caveat which allows employers to restrict the voting rights of employee shares. Moreover employee shareholders should have enhanced rights in the event of corporate failure, given that they face potential loss of wages as well as loss of savings tied up in company shares.

10. Companies offering employee share ownership should consider an Employee Advisory Panel to be a central element of such engagement with workers; those companies that offer employee share ownership but do not have such a panel should explain publicly why not. Where such a panel does exist, workers who own shares should be given additional representation. Companies could also consider establishing advisory panels composed solely of employees who own shares.

11. The US Employment Stock Ownership Plan (ESOP) model should be brought to the UK, with Employee Ownership Trusts (EOTs) having an option to become ESOPs where stock is allocated to individual employees rather than held in a collective pool. Embracing EOTs and ESOPs as part of entrepreneur succession planning could help widen employee ownership over time.

12. The 25-hour working time requirement for Enterprise Management Incentive (EMI) share plans should be lifted for academic employees participating in university spinout companies, to incentivise more academics to be involved in the creation of innovative, cutting edge, academic-owned start-ups. Further, the Government should undertake a review of university spinouts in the UK, exploring the extent to which British universities could learn from the relative success of US universities such as Stanford in developing a thriving culture of innovative spinout companies.

13. To help the UK’s tech start-up scene to attract top global talent, companies with up to 499 employees should qualify for EMI plans (up from 249 at present). Given the difficulty of matching Silicon Valley salaries, widening access to share options could make it easier for fast-growing start-ups to attract talent.

Getting government to lead the charge