TEANECK, N.J. (02/05/20) – Last month, an international team of surgeons delivered and operated the first medical laser in Haiti. The device will be used primarily to treat children suffering from catastrophic burns.

“Catastrophic burns among children are one of the worst healthcare crises in Haiti,” said Samuel Davis, founder of Burn Advocates Network. “There are thousands of children suffering from devastating burns in a country with only a handful of burn practitioners and crushing poverty.”

Burn Advocates Network (BAN), a Teaneck-N.J.-based nonprofit, recently donated a Lumenis Ultrapulse laser to Sacre Coeur Hospital in Milot, Haiti. Manufactured in Israel, this CO2 laser is the most powerful and reliable for treating burns, according to Davis.

“Laser treatment is simpler and safer than traditional surgery, which can put patients at significantly greater risk for deadly complications including infection,” he said.

On Jan. 5 - 7, BAN sponsored a mission to Haiti led by medical professionals from Israel’s National Burn Center at Sheba Medical Center, Tel Hashomer, home to I-PEARLS (Israel Pediatric and Aesthetic Reconstructive Laser Surgery Center of Excellence) the Middle East’s only center for laser treatment and research in burns, which broke ground one year ago.

During a medical teaching process known as “Grand Rounds,” the international team of burn care experts mentored thirty surgeons, nurses and therapists representing six hospitals in Haiti and the Dominican Republic. The mentors gave lessons on how to use the complex laser and other state-of-the-art techniques for treating severe burns in children.

“Laser is the most efficient treatment for everything in the scar, including itchiness, pain, hyperemia, elasticity,” said Prof Josef Haik, chief burn surgery and co-director of Sheba’s pediatric laser program. Haik was one of three Israeli burn and trauma practitioners who joined the BAN mission to Haiti.

CHILDREN ARE DISPROPORTIONATELY VICTIMS OF BURNS

According to Davis, children under age 12 make up about 60 percent of burn victims in Haiti and the Dominican Republic. He attributes this to open-fire cookware, dangerous electrical wiring and the unsafe use and storage of gasoline.

“When you can only hope to earn about two dollars a day, both parents are often forced to leave their children at home unattended,” Davis said. “And in every home a coal-burning open-flame stove called a ‘réchaud’ sits at toddler height directly on the ground. When you have very hungry children, and an irresistible aroma, a universal first reaction is to get closer and, too often, stick their hands in it. Kids frequently topple over the réchaud causing terrible scalding wounds.”

Most burn-causing accidents are entirely preventable through education and simple countermeasures, such as a ring of stones around the réchaud which warns children to stay out of this “danger zone,” Davis noted.

“Kids must be taught to keep a safe distance from the réchauds, and stay away from matches, gasoline, and fallen electrical lines,” he said.

During the massive earthquake that hit Haiti 10 years ago, countless réchauds were launched, spilling their boiling contents which caused wide-spread burns. This tragedy is what first prompted BAN’s on-going involvement in Haiti’s burn crisis.

The recent mission marked both the 10th anniversary of the earthquake and of the Burn Advocates and Sheba’s first humanitarian mission to the country. BAN delivered 50 tons of medical supplies on Royal Caribbean cruise ships, which docked at the neighboring port town of Labadee. General Yitshak Kreiss led a disaster relief mission by Sheba, which landed a mobile field hospital just 72 hours after the earthquake. The Israeli mission is widely credited with saving hundreds of lives being the first off-island country to deliver definitive trauma care.

During their rounds in January, the visiting doctors encountered several burn victims who required emergency surgery.

In one case, a 27-year old pregnant woman had fallen into a cooking fire after suffering a seizure. She had been hospitalized for many months for deep burns on her neck and face. She was unable to close her eyes or open her mouth which had fused shut. Going blind and unable to eat, the woman was in immediate danger of starving to death. Her chances of delivering a healthy baby and surviving the birth were slim.

After examining the patient and carefully deliberating, the burn-trauma team from Sheba Medical Center and their Haitian colleagues performed the risky emergency surgery needed to save the woman and her baby under local anesthesia.

The visiting surgeons performed 10 laser procedures, including surgeries on two brothers, ages 6 and 8, who were terribly burned in a house fire that claimed the lives of their parents on the island of Gonave. The boys were the first Haitians to receive ablative laser surgery in their country, according to Davis.

“The laser is a good initiative,” said Haitan burn surgeon Dr. Rolph Richeme, founder of Fondation Haïtienne D’Aide Aux Brûlés (FONHAB), the Haitian burn foundation. “I think if patients have hypertrophy or keloids then with this technology they will look and feel much better.”

“If burn patients, especially children, are more comfortable with the way their scars look and feel then they will find it much easier to adjust to their new reality,” Richeme notes. “They will be more optimistic about the future,” he said.

Prof. Josef Haik, director of Israel’s National Burn Center at Sheba Medical Center, and his Haitian counterpart Sacre Coeur Hospital Chief of Surgery Dr. Jerry Bernard, performed the procedures. Local surgeons and heads of hospitals overflowed into a nearby classroom to watch the surgeries via special video conferencing feed provided by the mission.

“While some procedures are cosmetic, the laser treatments in conjunction with physical therapy can really help with mobility,” said Kerri Gallagher, a registered nurse at Children’s National Medical Center in Washington, D.C. “Such a simple procedure can give a kid the ability to stretch the arms again.”

FOCUS ON MENTORING AND INFORMATION SHARING,

NOT JUST “THROWING MONEY AT THE PROBLEM”

“You can’t just throw money at Haiti and expect to solve these problems,” Davis said. “The solutions are in education, training and forming mentoring partnerships with Haitians and Dominicans who are helping themselves.”

Davis describes his organization and the Israeli doctors as being “advisors on the sidelines” who are available to give guidance to local medical professionals if and when they need it.

“There are many crises in healthcare in Haiti and DR, but there is no disease that takes up acute care hospital beds and cause sheer human misery like burns do,” Davis said. “For every percent of the body that is burned, one day in an intensive care unit is required — so, if you have 25 percent of your body covered in burns, you need to spend the better part of a month in intensive care.”

There is only one dedicated burn facility in Haiti, a nation of over 10 million people. Expanding the burn capabilities of hospitals around the country will save many children from unnecessary suffering.

The following international medical practitioners participated in the Burn Advocates “Grand Rounds in Burn Care and Ablative Laser Training for Burn Scars” mission and are available for interviews:

Note: Some of these photos contain graphic images of severe burns. All patients have granted permission to BAN to share their photos.

Burn Advocates Networks provides access to free specialized medical care to pediatric burn survivors in resource-challenged countries. It has sponsored annual burn camps in Israel, India, Brazil and Haiti. BAN plans to expand its I-PEARLS laser satellites with a focus on restoring the spirit as well as healing the scars in disadvantaged populations where these services are needed most. 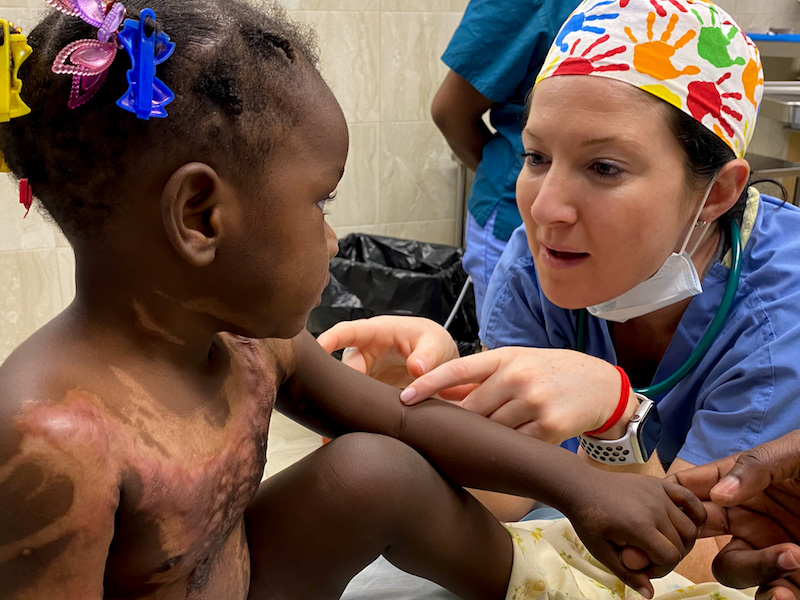 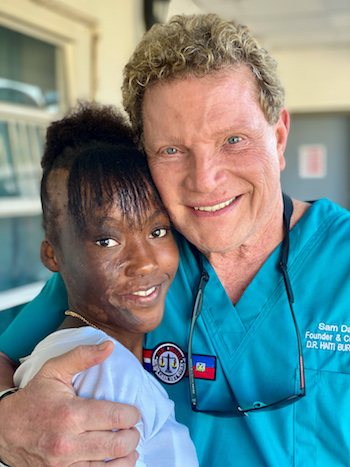 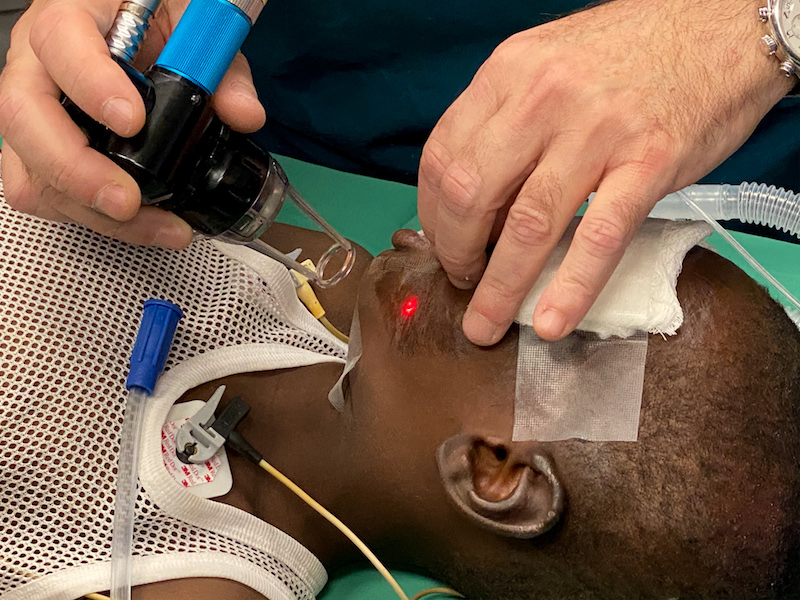 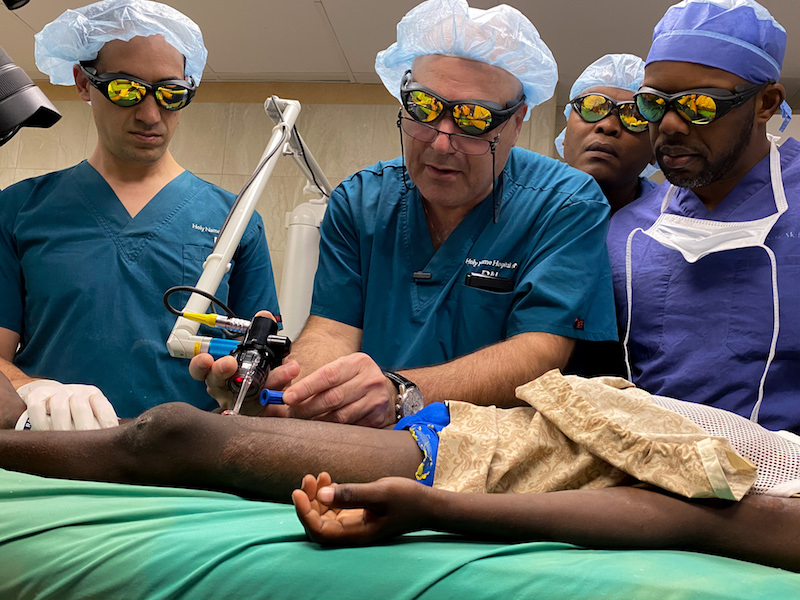