Orangutan victims of forest fires in Borneo are found a safe new home.

Three orangutans that were victims of the land and forest fires in Indonesia have been returned to the wild by conservationists. A team from Gunung Palung National Park (TANAGUPA), the Natural Resources Conservation Agency of West Kalimantan (BKSDA) and International Animal Rescue (IAR) Indonesia released the primates in the area of Batu Barat Village, Simpang Hilir Sub-District, North Kayong Regency in the National Park on Friday 27 September.

The three orangutans, named Arang, Bara and Jerit, had to be translocated because their forest home had been burned down. Arang and Bara were rescued in Sungai Awan Kiri Village on Monday 16th September while Jerit was rescued in Kuala Tolak Village, Mata n Hilir Utara District on Saturday 21st September. Although rescued in different places and at different times, the threats they faced were the same, namely forest fires and human conflict.

When the orangutans were rescued, they were found to be in an extremely serious condition: in addition to being very thin, lack of food had made them severely dehydrated. Jerit also had a festering wound on his leg from a snare and IAR’s vets found two bullets in Arang’s eyes. These injuries showed that in addition to being threatened by the forest fires which have scorched their homes, orangutans are also vulnerable to being attacked by humans when they are forced to search for food and shelter outside their natural habitat.

IAR Indonesia’s medical team has confirmed that the three orangutans are now in good condition. "The orangutans are now healthy and ready to be returned to their habitat," said IAR Indonesia Medical Team Advisor, Dr Joost Philippa. "We carried out a bullet removal surgery on the face of Arang last week and now the wound has healed, as well as the wound from a snare on Jerit’s leg," he added.

The release team began preparations before dawn for the journey from IAR’s rehabilitation centre in Ketapang, West Borneo. The medical team made a final check on the orangutans before they left for Batu Barat. The overland journey took four hours and was continued by boat across the river for one hour and followed by a journey on foot for half an hour to the release site.

The West Batu area which is in the Gunung Palung National Park was chosen as the release site based on the results of a pre-release survey conducted by the TANAGUPA Centre and IAR Indonesia’s team. "Based on our field surveys, the number of orangutans in this location is still low so it is very suitable for translocations. In addition, the status of the area as a National Park also guarantees the safety of orangutans in it," explained IAR Indonesia Field Manager, Argitoe Ranting.

Ari M Wibawanto, Head of the TANAGUPA Centre, said: “For TANAGUPA itself, we have three possible places for translocation that have carrying capacity, namely Riam Bekinjil, Bukit Kubang and Bukit Daun Sandar. We have received seven individual orangutans who have been translocated to our area, five of them to Bukit Kubang. Going forward with the West Kalimantan BKSDA and IAR Indonesia we will survey other locations that are suitable to be used as a place of translocation so that the orangutan population does not accumulate in one place. This is important to ensure the survival of orangutans. If the translocation sites are limited to only three places early on, we worry that it will cause problems later. However, translocation is the last solution in efforts to save orangutans. What we should be doing together is protecting remaining orangutan habitat now. Arang, Bara and Jerit are examples that show that orangutans are truly under threat. Therefore, I invite all people and also all parties not to burn forests, not to cut down forests and also do not to do illegal hunting.”

Sadtata Noor, Head of the BKSDA, said: “The recent rescue and release of orangutans by BKSDA Kalbar with its partners IAR Indonesia, on the one hand is an amazing achievement but on the other hand gives cause for deep concern. The rescue activity is only a small action, indeed a miniscule one, compared to the steps and policies that should be taken to stop and prevent this ongoing and recurring disaster. A disaster that has wide and deadly impacts on life.”

Karmele L Sanchez, Director of IAR Indonesia, said: “We greatly appreciate the efforts of TANAGUPA to maintain bio-diversity and habitats of orangutans. The TANAGUPA and Sungai Putri landscapes are home to important orangutan metapopulations with an estimated number of 3,280 (PHVA 2016) with quite high viability. These three orangutans who are part of these metapopulations had been pushed to the edge of their habitat by fires and conflicts. Therefore, the most appropriate place for them to be released is in TANAGUPA which is convenient and safe. The orangutans have become victims of the fires but it’s very fortunate that the team from the BKSDA and IAR was able to save them and they can now be returned to the safety of the woods in TANAGUPA. We are delighted that these three orangutans survived and can now resume their natural lives."

Alan Knight OBE, IAR Chief Executive, concluded: “Our goal is always to release rescued orangutans back into their natural habitat and in that sense this translocation operation has been a huge success. However, the underlying problem of habitat destruction still remains and, until that is addressed at the highest level, our team will continue to be called on to rescue orangutans in desperate need of food and shelter.”

Rescue of Arang and Bara: 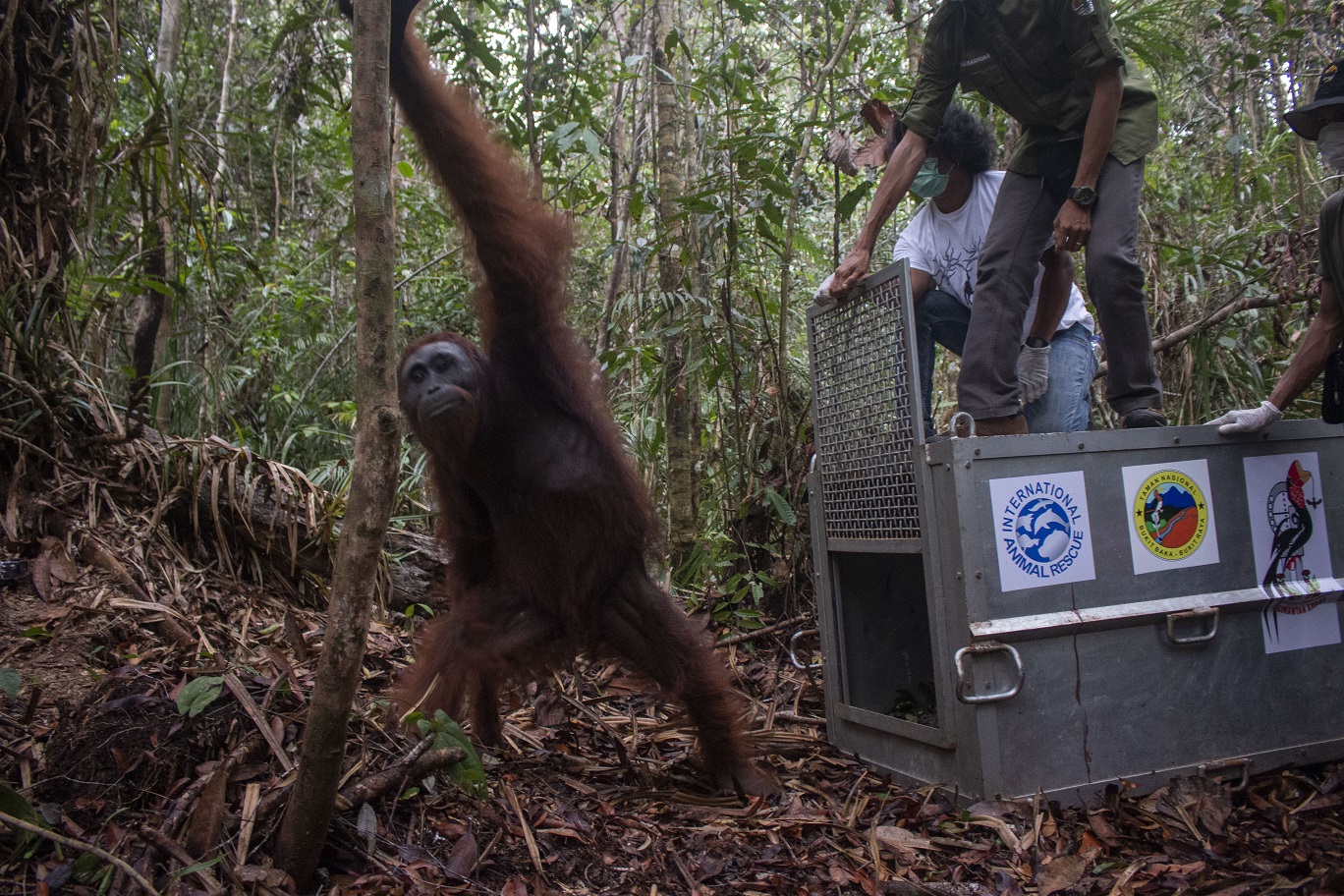 At International Animal Rescue we not only save animals from suffering, we also rehabilitate and release them back into the wild and work to protect their precious natural habitats. Our work includes cutting free and caring for captive bears in India and Armenia, rescuing and rehabilitating orangutans and other primates in Indonesia and treating injured and orphaned howler monkeys in Costa Rica. Our aim is to return animals to their natural environment wherever possible, but we also provide a permanent home for those that can no longer fend for themselves.

As human populations expand, wildlife comes under increasing threat. By rescuing individual animals belonging to species like the orangutan and reintroducing them into protected areas in the wild, our work also plays a role in the conservation of the species as a whole.