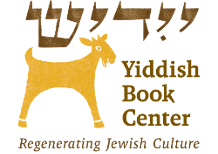 First performed on the Yiddish stage in 1922, Caraid O’Brien’s latest work is part of the Carnegie Hall Voices of Hope festival examining art created amidst times of crisis and human tragedy. This program will be presented by the Yiddish Book Center as part of the virtual festival, which runs from April 16–30, 2021.

The Dead Man will air (in English translation) on Sunday, April 25, at 7pm (EDT).

Surviving members of a Jewish community gather in the rubble of a decimated synagogue in Poland in the aftermath of World War I. Ravaged by destruction, hunger and the influenza pandemic, how will they rebuild their lives? Dealing with dislocation, madness, and death, all they have left is a powerful hope for a prosperous new future.

The Dead Man is a timeless story of heartbreak and strength, and the relevance to today’s global moment is striking. “The play focuses on a traumatized community trying to move forward,” says O’Brien. “Together, they chip through the darkness by not shying away from their collective horror.”

Masterfully translated by O’Brien—in its English entirety for the first time ever—the play’s radio drama format is reminiscent of the wildly popular Yiddish theater broadcasts of the 1920s and ‘30s. Twenty-four talented actors were cast (ranging in age from 3 to 85), including Broadway veteran Hal Robinson. O’Brien recorded each during the current pandemic.

O’Brien is a fascinating interview. Full of humor, history, and scholarship, she tells a mesmerizing story. An accomplished actor, writer, and producer, O’Brien is a three-time recipient of a new play commission from the Foundation for Jewish Culture. She began learning Yiddish while interning at the Yiddish Book Center in Amherst, MA, where she would later serve as a Translation Fellow. The Village Voice wrote that her translation of Sholem Asch’s God of Vengeance “set Show World aflame.”

O’Brien has hosted and directed radio programs on literary topics for WBAI and has lectured at Harvard University, Queens College, and the 92nd Street Y. She was mentored by legendary Yiddish performers Luba Kadison and Seymour Rechtzeit, and her first book, Seymour and Miriam: Yiddish Theater and Radio in the Twentieth Century, is forthcoming from Harvard Judaica.

About Voices of Hope

From April 16–30, 2021, Carnegie Hall presents Voices of Hope, an online festival that examines the resilience of artists, exploring works that they felt compelled to create despite—and often because of—appalling circumstances and human tragedy. Over the two weeks, Carnegie Hall’s first-ever digital festival explores this theme through more than 100 events including digital programming presented by Carnegie Hall and more than 35 leading cultural and academic institutions across New York City and beyond.

Register for The Dead Man premiere at the Carnegie Hall Voices of Hope festival.

About the Yiddish Book Center

The Yiddish Book Center is a nonprofit organization working to recover, celebrate, and regenerate Yiddish and modern Jewish literature and culture.

The million Yiddish books recovered by the Yiddish Book Center represent Jews’ first sustained literary and cultural encounter with the modern world. They are a window onto the past thousand years of Jewish history, a precursor of modern Jewish writing in English, Hebrew, and other languages, and a springboard for new creativity. Since its founding in 1980, the Center has launched a wide range of bibliographic, educational, and cultural programs to share these treasures with the wider world. Yiddishbookcenter.org

Director of Communications and Marketing