"Ten Commandments Vol. 2" is seeking art asylum in a public space where the work of art can stand or be exhibited in the future. Access to the work of art must be public. 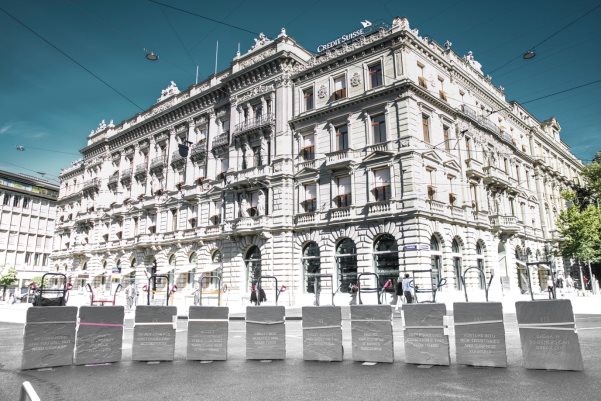 “Ten Commandments Vol. 2" is an artonomic collaboration between international concept artists the Riklin Brothers and Fyooz. Together, they agree that society should decide where the work of art goes. “With the Ten Commandments Vol. 2 we have laid a solid, honest and lasting foundation of values for our company Fyooz. We hope that the art will continue to be publicly present and accessible. It is not we who decide where the future location of the art installation will be, but people who identify with the work,” says Florian Kohler, Fyooz’s co-founder. The Riklins added: "In the worst case, our Ten Commandments will be disposed of professionally but it is our wish that the commandments are preserved in a public place". Those wishing to suggest where the art should take asylum should please enter applications and ideas for a new location in the following online form.

From 22 June to 3 July 2020 the Swiss concept and action artists Frank and Patrik Riklin chiselled ten sandstone blocks and wrote the "Ten Commandments Vol.2" for the society of the future. On July 9th, the commandments were publicly revealed near Zurich's Paradeplatz and given to society as a 'talking piece' in favor of value-based management and action. In artonomic collaboration with Fyooz, the Riklin brothers work is at the interface between art, economy, philosophy and religion. The art sees itself as a meaningful "compass for the society of the future". It is intended to create a contemplative associative space for individual thoughts and social dialogues.

Barely two weeks after the sinking of the "Ten Commandments Vol. 2" in the Zurich Schanzengraben), (see video) the city of Zurich issued an eviction order. The art installation weighing around one tonne must be removed by 15 August at the latest.

It remains to be seen whether the new commandments will gain a foothold in society or not. "It was clear to us that we would be faced with an eviction order," the Riklin brothers said. The fact that the art action is misunderstood by the city of Zurich as an advertising campaign disappoints the artists. At the same time, however, the artists appreciate the eviction, because artonomic action in public spaces is not yet fully established as an art form.

The Scriptures of Ten Commandments Vol. 2

I.   Believe in the urgency of your thoughts.

III. Break in so others can break out.

IV. Venture into new territories and surprise yourself.

VI. Be convinced and you will not need courage.

VIII.Accept antagonism as it is a sign that something new is happening.

IX. Do not look for customers find accomplices.

X.  Keep processes going even if they seem to end.

About the Riklin Brothers

Swiss concept artists Frank and Patrik Riklin have been exploring for 20 years the extent to which the potential of art expands when it leaves the representative framework and intervenes directly in social realities. Where is the interface between art and everyday life, business and society? How does the role of the artist change when art is placed where one least expects it? Frank and Patrik Riklin shake different systems of everyday life and create new realities.

Fyooz is a Swiss based and regulated marketplace owned and operated by Urknall AG, driven by an expert team with decades of expertise in breaking new frontiers.

Switzerland stands for precision, quality, stability and security. Its legal and regulatory framework is driven by a tradition of direct democracy. This philosophy plays into the democratizing potential that blockchain represents and creates an exceptional foundation upon which blockchain based businesses such as Fyooz can thrive.

The Fyooz team is global and has a network within sports, film, and music, as well as significant depth in online brand building and marketing. Already greenlighted by lawyers in most parts of the world, Fyooz intends to be the global investment marketplace for people’s passions.