Excessive Ads Negatively Impact Consumers' View of a Brand More Than Inappropriate Content, According to GWI and WARC

NEW YORK CITY / AGILITYPR.NEWS / March 12, 2021 / More Consumers Say Excessive Ads are The Reason for Negative Feelings of a Brand Than Ads That Appear Next to Inappropriate Content, According to GWI and WARC

“Excessive” Resonates With Most Consumers’ Association of Social Media,

There’s no question that the global pandemic changed consumers’ appetite for and patience with brands’ advertisements. Below, GWI, a leading leading audience targeting and consumer research company, examines the types of ads that and ad content that negatively impact US consumers’ view of a brand, feelings about the ads they typically see on social media, TV, on the web, and in emails, and their most recent actions relating to ads they have viewed, and more. The research was conducted in partnership with WARC.

Consumers mostly want ads to provide product information (50%), but they also want them to provide discounts and special offers (40%); nearly four-in 10 (39%) want ads to be entertaining and one-third (33%) want ads to teach them something new.

When asked “which word best describes the ads you typically see….” on TV, social media and on websites, the option “excessive” was high on many consumers’ lists.

Specific to social media, ads in this channel are most likely to be seen as personalized than any other medium - 21 percent of Americans say that social media ads are personalized, compared to just 14 percent for website ads, and only 9 percent for TV ads. Although 32 percent say excessive describes the ads they see on social media, this is in line with the 32 percent who say the same of website ads, and 34% who say the same of email ads.

While not the highest-ranked adjective, 31 percent of consumers surveyed said excessive best describes the ads they see on TV; entertaining received the highest on the list for TV ads (35%). Nearly one-third (32%) said informative and 29 percent said funny.

Emails from companies mostly “excessive” but also viewed as “informative”

Video ads still useful, but many consumers also skipping them

When asked what activities specific to the ads they see in their lives they do, more than half (53%) said they have skipped an online video ad in the past seven days, though another 40 percent said they watched an entire video ad during that same time; three in 10 (30%) deleted cookies from their device, 29 percent said they researched something seen in an ad and one-quarter (25%) said they clicked on an ad on a website. Additionally, 15 percent say they bought something they saw in an ad in the past seven days. 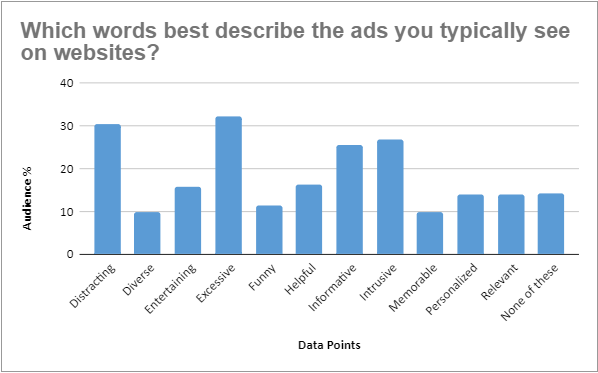