HEATHROW TERMINAL FIVE EXHIBITS SKELETON OF NEW SPECIES OF DINOSAUR: COUSIN OF THE DIPLODOCUS FROM THE LATE JURASSIC PERIOD

The skeleton of a 155 million year old diplodocus has gone on exhibition at Heathrow Terminal 5 from April 2nd until the end of May before being sold by the leading French auction house Aguttes in June for an expected £2m. 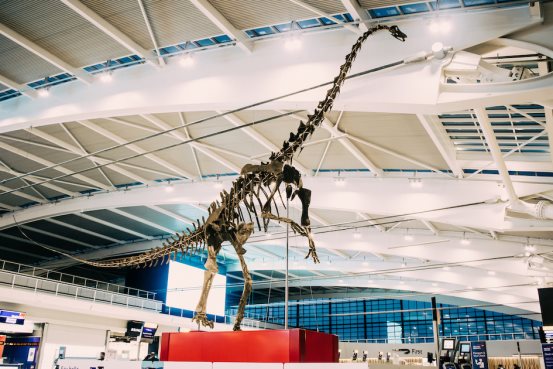 Nicknamed ‘Skinny’ the Diplodocus skeleton shows important and significant impressions of the skin of the dinosaur, which has never been discovered before on a Diplodocus, making this a uniquely valuable skeleton – a world first. It was discovered in shale beds in Wyoming USA in 2012.

Ross Baker, Chief Commercial Officer at Heathrow said, “What a sizeable welcome for families travelling this Easter! We’re excited to see the ‘roar-some’ reaction from our passengers, as they encounter this completely unique specimen before heading on their travels with loved ones.”

Scientific study indicates it is a new species, a cousin of the diplodocus. It will be seen by the millions of passengers at Heathrow’s Terminal Five for two months during April and May before its sale at auction.

Last year Aguttes Auctions sold a dinosaur skeleton for £2m in the Eiffel Tower. The sale of this new dinosaur is expected to achieve a figure greater than £2m. The Aguttes-Paleomoove dinosaur is an authentic fossil with an original skeleton that is 90% complete and measures 13 meters in length.

Diplodocus walked the earth in the Late Jurassic some 155-145 million years ago and was a vegetarian dinosaur species with a very long neck, allowing it to feed both high and low. The species is the mascot of the British Museum which has a Diplodocus cast known as ‘Dippy’ whose 292 bones are cleaned every two years.

It was huge, tipping the scales at 20,000 kg, feeding on leaves and other soft vegetation using rows of comb-like teeth.

This totally unique dinosaur skeleton is presented in a revolutionary way as a contemporary work of art, but respects all the scientific criteria of preparation and reconstruction. It will be possible to change its initial position a little and to make it take another stance thanks to the great interpretation capabilities of the French company, Paleoomove Laboratory, based in Marseille which specializes in the articulation of dinosaur skeletons.

Eric Mickeler, International expert in Natural History, and a specialist in dinosaurs is also a special advisor to Aguttes Auction house. He says: “This exceptional skeleton is from a cousin of the Diplodocus. As an original skeleton it is quite remarkable. It is currently the only Diplodocus in the world with the imprint of its skin: it is therefore a world first.”

Asked why people invest in buying dinosaurs, Eric Mickeler says: "They are powerful symbols which act as memento mori and remind us of the outcome of all species over the ages. Their sheer size awes people, they are immense and that is part of their fasciation for collectors. Buyers look for big impressive aesthetically attractive and well-preserved examples. It is also a case of supply and demand. There are very few found and so prices grow because there is a strong demand for them. So if you are looking seriously to buy one choose the best you can find, the best preserved.”The dinosur carries the Eric Mickeler Fossile Label, which is a protected brand, to indicate and strongly emphasize the scientific value of this fantastic dinosaur. 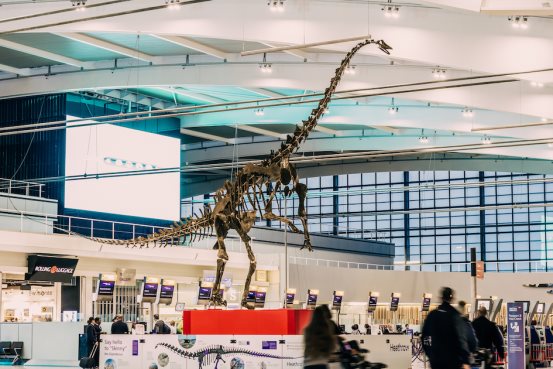 At 13 metres long IT would have weighed 20 tonnes.

Paleomoove Laboratory is a French company established in Marseille which specializes in the restoration of fossils. This company is headed by Nicolas Tourment, a French expert in the presentation of archeological items. He has done work for Christie's and Sotheby's and has worked on many skeletons of dinosaurs and mammoths: some of these specimens now belong to institutions.

Supporting structures for dinosaur skeletons have long been made from iron and steel despite their significant lack of resistance to rust. Paleomoove decided to use stainless steel for its durability and aesthetics.

This particular means of construction has led us to finally be able to design structures that can be transformed into different shapes giving a dynamic visual presentation that can accommodate itself to different settings.

Stainless steel has improved mechanical properties at various temperatures in comparison with other materials which is an undeniable asset in the construction. It also allows the reduction in the weight or the dimensions of the structural elements. Its elasticity and its hardness allow it to be used in different types of implementation while offering a resistance to wear (friction, abrasion, shocks, elasticity ...).

Recycled Stainless steel is the "green material" par excellence, recyclable to infinity. In construction, the effective recovery rate approaches 100%. It is also completely neutral with respect to the environment. In addition, the longevity of stainless steel meets the needs of sustainable construction giving lifetime guarantees.

For more information on the dinosaur exhibited at Heathrow, which will be auctioned in France in June 2019, please contact the dinsaur expert, Mr. Eric Mickeler, well-known consultant of international sales of dinosaurs.

AGUTTES is the first independant auction house in France (without external shareholders) and was ranked as the fourth largest auction house in the French market in 2018. Founded by Claude Aguttes in 1974, the company holds 80 auctions per year with a team of 40. AGUTTES is also a major actor at Drouot in Paris, where it achieved the highest sale records in 2015, 2017 and 2018. In 2017, the auction house was chosen by the French Commercial Court to organize the sale of the tremendous Aristophil Collections of Rare Books and Manuscripts. In June 2018, AGUTTES reached a world record by selling a new carnivorous dinosaur species for more than 2 million euros at the Eiffel Tower. In 2019, the company opened a new sales representative office in Brussels and completed significant renovations in its saleroom in Lyon – the former train station of Brotteaux – which will allow new events to be created.