On Tuesday 8 October Devon Air Ambulance Chief Executive, Heléna Holt, and Melanie Stevens, HR Manager at the Charity, were presented with the prestigious Silver Employer Recognition Scheme Award (ERS) by Her Majesty’s Lord-Lieutenant at Rockbeare Manor. The Lord-Lieutenant is the Queen’s representative in the County. 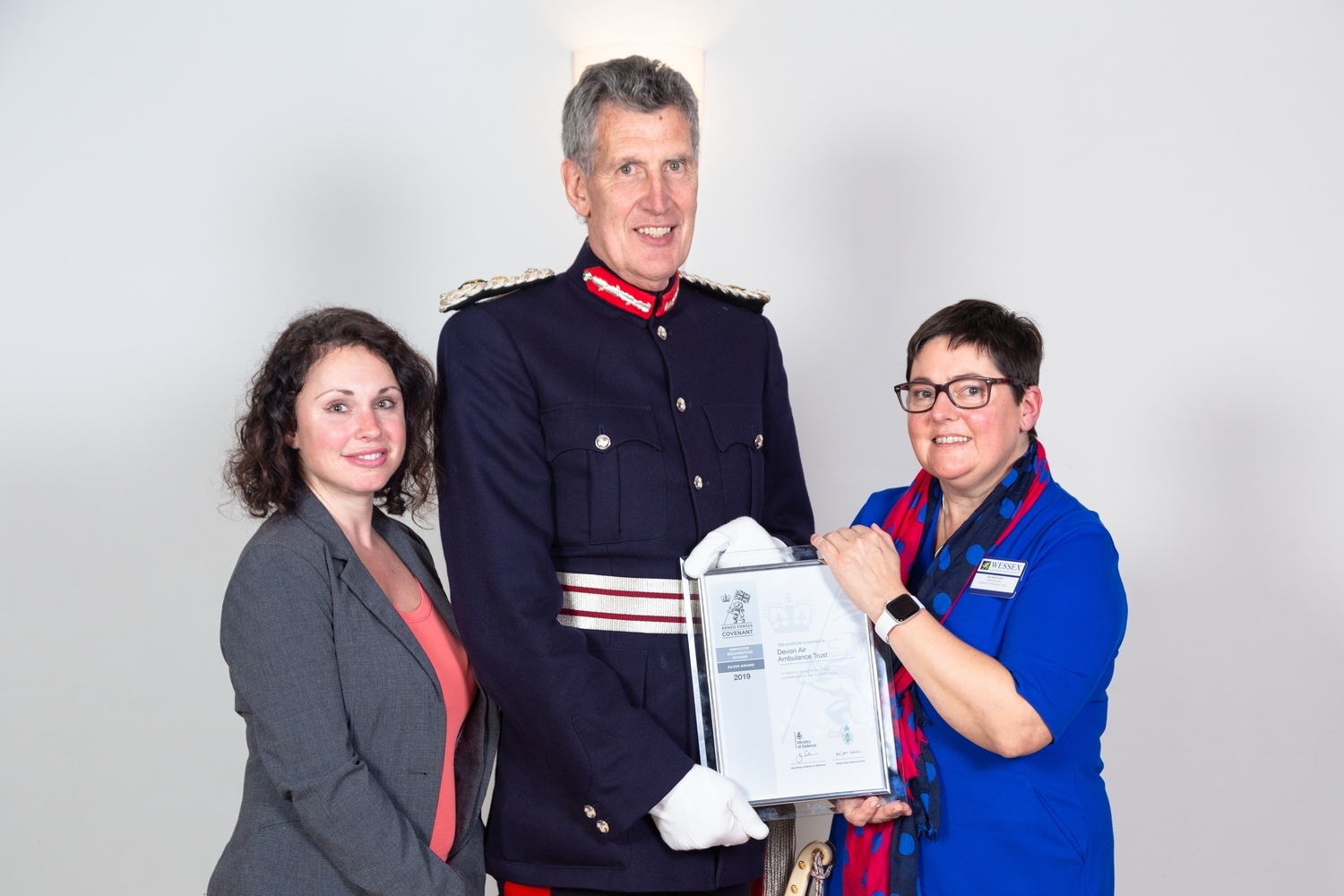 Devon Air Ambulance was among four South West employers awarded for their support of the Armed Forces at the evening event. The Silver Award recognises those employers who have signed an Armed Forces Covenant and who actively demonstrate support for the Armed Forces by employing at least one member of the Defence Community, be that a Reservist, Cadet Forces Adult Volunteer, Service Leaver or military spouse.

The Armed Forces Covenant is a promise by the nation to ensure that those who serve or who have served in the Armed Forces, and their families, are treated fairly.

The Employer Recognition Scheme acknowledges employers that have provided exceptional support to the Armed Forces community and defence by going above and beyond their covenant pledges.

‘We are very lucky to have some fantastic serving and former Forces personnel and reservists on our team who bring a wealth of diverse skills and experience. Recognising how important their contribution is it was obvious we should sign up to the Armed Forces Covenant. To be awarded the Silver Employer Recognition Scheme Award is an honour and we will continue to do our best to support our incredible people.’

Through a 3-tier approach of bronze, silver and gold awards, the ERS recognises the different levels of commitment provided by employers. This allows the Ministry of Defence to publicly thank and honour those organisations for their support.

‘These awards recognise the outstanding support for our armed forces from employers across Britain and I would like to thank and congratulate each and every one. Regardless of size, location or sector, employing ex-forces personnel is good for business and this year we have doubled the number of awards in recognition of the fantastic support they give.’

‘Veterans make a huge contribution to businesses across the country and it’s fantastic to see a record breaking number of organisations recognised for their support. We’re working closely with businesses to help them further understand the huge value that veterans, reservists and military spouses can bring to their organisation.’

About the Armed Forces Covenant

Devon Air Ambulance Trust is the Charity which raises the funds to keep Devon’s two Air Ambulances flying. The service is 27 years old and is funded by the generosity of the community, businesses and friends of Devon. Last year it cost £7.5 million to keep the service flying, helping 1109 patients, of which 11% were children.

The Exeter based aircraft operates until 2am every day and since it started flying into the hours of darkness over 118 patients have been helped at night time, using our growing network of Community Landing Sites. You can read more about our community landing sites here. Devon Air Ambulance also runs a weekly lottery, which in 2018 raised over £2 million for the service