UNITED KINGDOM / AGILITYPR.NEWS / February 27, 2020 / When President Nixon declared war on drugs in 1971, not everyone sympathised with his stance, as this board game testifies. Scam: The Game of International Dope Smuggling, as it was christened, was an artistic if anarchic response to the policy from underground boardgame producers Brown Bag Enterprises, and was delivered in a rolled up tube that looked like a joint.

An excerpt from the rules reads: “Generally, SCAM goes like this: you begin on the drop out of College square and keep moving around the AVE until you have enough money and CONNECTIONS to get off the AVE. You then work the COUNTY and NEW YORK until you get enough money to put together a smuggling SCAM. This involves FLYING to MEXICO, AFGHANISTAN or SOUTH AMERICA, buying dope, smuggling back to the States and selling in NEW YORK (where there’s more money) or in THE COUNTY (where there’s less PARANOIA). To win the game, you have to make ONE MILLION DOLLARS. If any of the following rules seem vague, unclear or stupid, feel free to change them to suit yourself.”

The map features maps of Afghanistan, India, Mexico and South America, with a cameo appearance by Uranus in the upper-left corner. New York, The Ave and The County appear as squared diagrams.

Daniel Crouch will be asking £5,000 for the game at this year’s London Map Fair – Europe’s largest map fair with around 40 exhibitors – at the Royal Geographical Society in Kensington Gore on June 6 and 7. 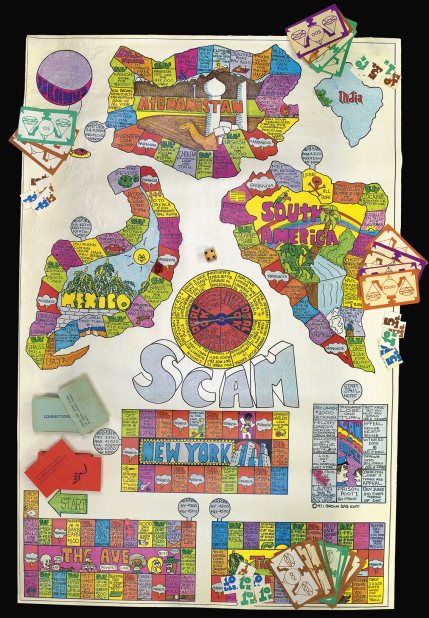 Photo: The anarchist’s response to President Nixon’s 1971 war on drugs: Scam: The Game of International Dope Smuggling. Daniel Crouch will be asking £5,000 for the game at this year’s London Map Fair on June 6 and 7.