HACKENSACK, NJ / AGILITYPR.NEWS / January 14, 2020 / Solo technology used during the Cauvery Calling and Mahashivaratri for streaming live video to millions of viewers across the world

LiveU’s wireless video encoder, Solo, is being used by Isha Foundation – a non-profit, public service organization founded by Sadhguru – to connect with millions of well-wishers and volunteers in India and around the world. The Foundation uses Solo to stream live events, notably the night-long Mahashivaratri festival at Isha Yoga Center – which is watched by around 50 million viewers – and the Cauvery Calling and Rally for Rivers projects to revitalize India’s depleting rivers.

Rally for Rivers was launched by Sadhguru in September 2017 when he personally drove over 9300 kms in 30 days to raise awareness about the dire situation of Indian rivers. Today it is the world’s largest ecological movement, supported by over 162 million people, and is a major force in shaping river revitalization policy in national governments and world bodies such as the United Nations. Cauvery Calling is an on-ground implementation of Rally for Rivers, to revitalize river Cauvery, the lifeline for 84 million people in southern India.

Swami Trika, a full-time volunteer at the Isha Foundation said, “We have been using LiveU Solo to cover this campaign since the beginning, spanning multiple outdoor activities. This year, we not only used Solo but also LiveU’s mobile app services, LU-Smart. From inception to execution, LiveU has played a major role in helping us live stream outdoor footage in the highest quality, which wouldn’t have been possible otherwise.”

Ranjit Bhatti, Director of South Asia, LiveU, said “The Isha Foundation team was one of our first LiveU Solo users in India and the relationship has been very strong ever since. We’re honored that they have placed their trust in us and to play a part in such a noble cause. Sadhguru has an uncountable number of devotees in India and beyond. Being able to reach out to them live has been a very enriching experience for the viewers.” 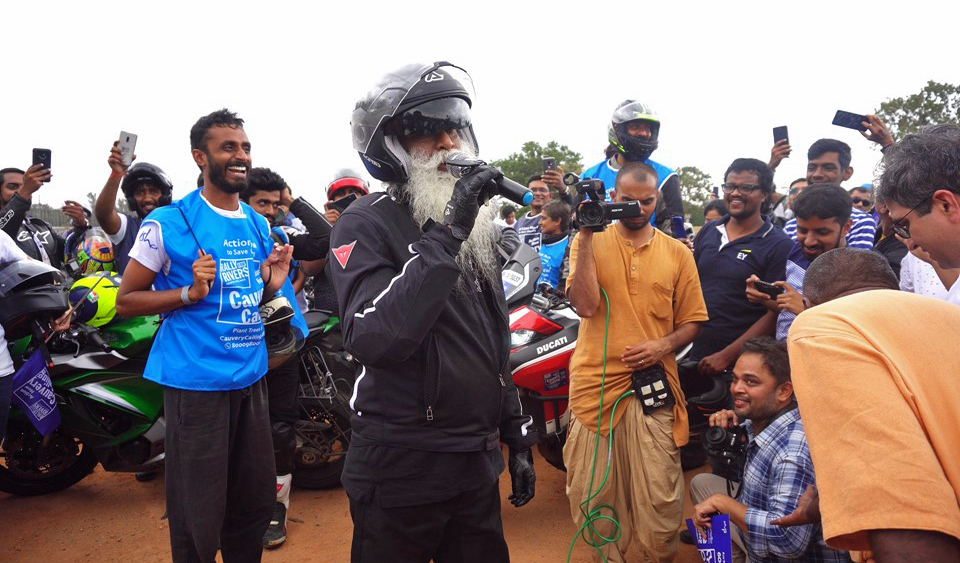 Isha Foundation is a non-profit human-service organization, supported by over nine million volunteers in over 300 centers worldwide. From its powerful Yoga programs for inner transformation to its inspiring projects for society and the environment, Isha’s work is an endeavor to create an inclusive culture that is the basis for global harmony and progress. The foundation is headquartered at the Isha Yoga Center near Coimbatore in southern India, and at the Isha Institute of Inner-sciences in Tennessee, USA.

LiveU is driving the live video revolution, providing live video streaming for TV, mobile, online and social media. Let your audience become part of your story with high-quality and flawless live video, transmitted from anywhere in the world, through the use of our patented bonding and video transport technology. LiveU creates a consistent bandwidth and a reliable connection so you can acquire, manage and distribute high quality remote live broadcasts over IP. Our broad portfolio of products sets the industry standard for live video production. From backpacks to smartphones, and satellite/cellular hybrid to external antenna solutions, LiveU offers a complete range of devices for live video coverage anytime, anywhere. In addition, LiveU offers extensive cloud-based management and video distribution solutions. With over 3,000 customers in 100+ countries, LiveU’s technology is the solution of choice for global broadcasters, online media, news agencies and social media.