The countdown is over: PLAYMOBIL has announced an exciting and innovative dino adventure for the end of May with the new Dino Rise play world. Those who are curious can get to know the extraordinary story even before the launch of the toy series. From 2nd May, the accompanying series “DINO RISE – The Legend of Dino Rock” will take all fans of the prehistoric giants on an action-packed, heroic journey.

A total of 7 episodes of 7 minutes each in high-quality CGI animation will be broadcast on the PLAYMOBIL YouTube channel, and children can also watch DINO RISE via the YouTube Kids app. The worldwide kick-off includes the languages German, English, French, Spanish, Italian and Dutch.

DINO RISE is the second animated series that accompanies a new PLAYMOBIL theme digitally, creating anticipation and enthusiasm among fans. The great performance of NOVELMORE, the animated series on the epic PLAYMOBIL knight’s universe, has already shown how the combination of moving image content in excellent quality and innovative products succeeds among the young target group. The latest story from PLAYMOBIL presents the dinos quite unconventionally not as attackers, as in many well-known action adventures, but alongside young heroes fighting against evil forces. PLAYMOBIL thus inspires adventurous kids to discover a whole new side of the popular prehistoric giants. With the matching play sets, they can then become heroes of their own, great dino adventure from the end of May.

The action-packed episodes of DINO RISE introduce the story and characters of the new play world: It all starts when a group of young friends around their brave leader Ian gets together at Uncle Rob's junkyard in Texas. They learn that the shady Comet Corporation is about to destroy the legendary Dino Rock in search of valuable resources. The friends want to prevent this! In their search for a solution, Ian encounters the T-Rex and other dinos, the powerful keepers of Dino Rock. The teens join forces with the dinos to form an inseparable team against the Comet Corp. and its evil, human-controlled machines. The giants become their helpers and companions. Will the friends manage to protect, defend and save the world of the dinos? What Ian doesn't know yet is that, according to legend, as the "Chosen One" he holds the key to a hidden world - and his heroic journey is just beginning in these seven exciting episodes...!

With this gigantic story, the new series from PLAYMOBIL is sure to arouse plenty of enthusiasm for the new playsets, which will be available from the end of May. A mega advertising package also ensures that no one will miss out on the new PLAYMOBIL dinos. TV commercials and campaigns in print/online media and on social media accompany the launch of DINO RISE. In retail trade, the exciting new packaging concept and uniquely presented product carriers and displays will attract the attention of dino fans and all those who want to become one. 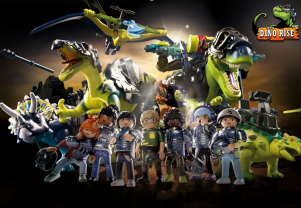 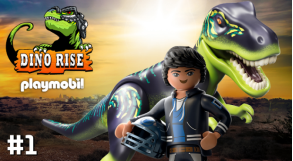