LONDON, UK / AGILITYPR.NEWS / October 27, 2020 / A Universal Robots UR10e supplied by RARUK Automation has removed the need to manually unload and pack wire forms produced at John Binns & Son (Springs) Ltd. As the first robot on site at the Skipton-based, £3 million turnover business, it signals the intention of JB Springs to utilise the latest manufacturing technologies and bring about genuine competitive gain.

Established way back in 1895, JB Springs has witnessed many changes in the manufacturing landscape, but to this day remains a family-run business. The ISO9001-accredited company operates from 27,000ft2 purpose-built premises dedicated to the production of springs and wire forms for sectors that include medical, electronics, aerospace and automotive.

Increased technology investment in recent years has underpinned the company’s commitment to stay at the forefront of spring manufacturing in the UK, with its latest arrival, the Universal Robots UR10e, a case in point.

“We have a Wafios BM6 CNC wire-bending machine which produces 3D wire-form components in batches of thousands,” explains Alex Driver, Managing Director at JB Springs. Due to short cycle times an operator needs to be in full-time attendance whenever the machine is running to unload and pack the parts. As this work is repetitive and not a very cost-effective use of skilled labour, we thought it ideal for automation.”

JB Springs considered three different robots before concluding that the Universal Robots UR10e was the optimum match for its applications.

“In particular we thought its programming was the most straightforward,” says Mr Driver. “The fact that it offered collaborative capabilities and was aesthetically pleasing – alongside the attentive responses we received from RARUK Automation – made it our first choice. We also spoke with a couple of users, both of whom were very happy with it.”

The Universal Robots UR10e is an extremely versatile collaborative robot (cobot) offering high payload (10kg) and long-reach (1300mm) capabilities. Spanning wide workspaces without compromising precision or payload performance, the UR10e is proving extremely popular for applications that include machine tending, palletising and packaging. Completing this particular highly flexible and reliable robotic solution is a Robotiq 2 Finger 85 adaptive gripper. With a Plug + Play kit for Universal Robots, this easy to customise gripper gives full control to users who can adjust the gripper’s position, speed and force to give a perfect grasp.

“As it was our first robot, some of the staff were understandably a little anxious, but once it arrived and the training had been delivered by RARUK Automation, they became more confident and soon got fully on-board,” says Mr Driver. “It is now held in such affection that they’ve even given it a name – Kevin.” Training with one of their own UR certified trainers is just one of the many tailored services that RARUK Automation can provide to ensure users get to grips with their UR robots.

Since installation at JB Springs, the UR10e has been busy automating production on the Wafios BM6, which is fitted with a Keyence high-speed inspection camera. In one example application, 12mm diameter pre-galvanised wire forms receive four bends in a 9-second cycle time before being unloaded and packed by the UR10e.

“The robot picks and packs parts neatly, saving a massive amount of costed manual labour,” says Mr Driver. “Our wire forms can vary from simple hooks and brackets through to complicated linkages for machinery, precision components for electronics and medical equipment, automotive parts, and welded assemblies for production line systems. We use the UR10e wherever we possibly can and it’s a perfect example of how technology is helping us to constantly improve our manufacturing efficiency and accuracy.”

Of course, 2020 has been a tough year for everyone due to the COVID-19 pandemic, but JB Springs has been playing its part in the fightback. The company has manufactured springs for ventilators and hospital beds.

“Ultimately, investing in the UR10e has allowed us to redirect labour to other operations where more value can be added by having skilled input,” concludes Mr Driver.

In its 125th anniversary year, JB Springs has proved there is no age limit to learning new tricks. The Universal Robots UR10e from RARUK Automation has transformed its production of wire forms and will help keep this progressive UK manufacturer at the leading edge of its sector. 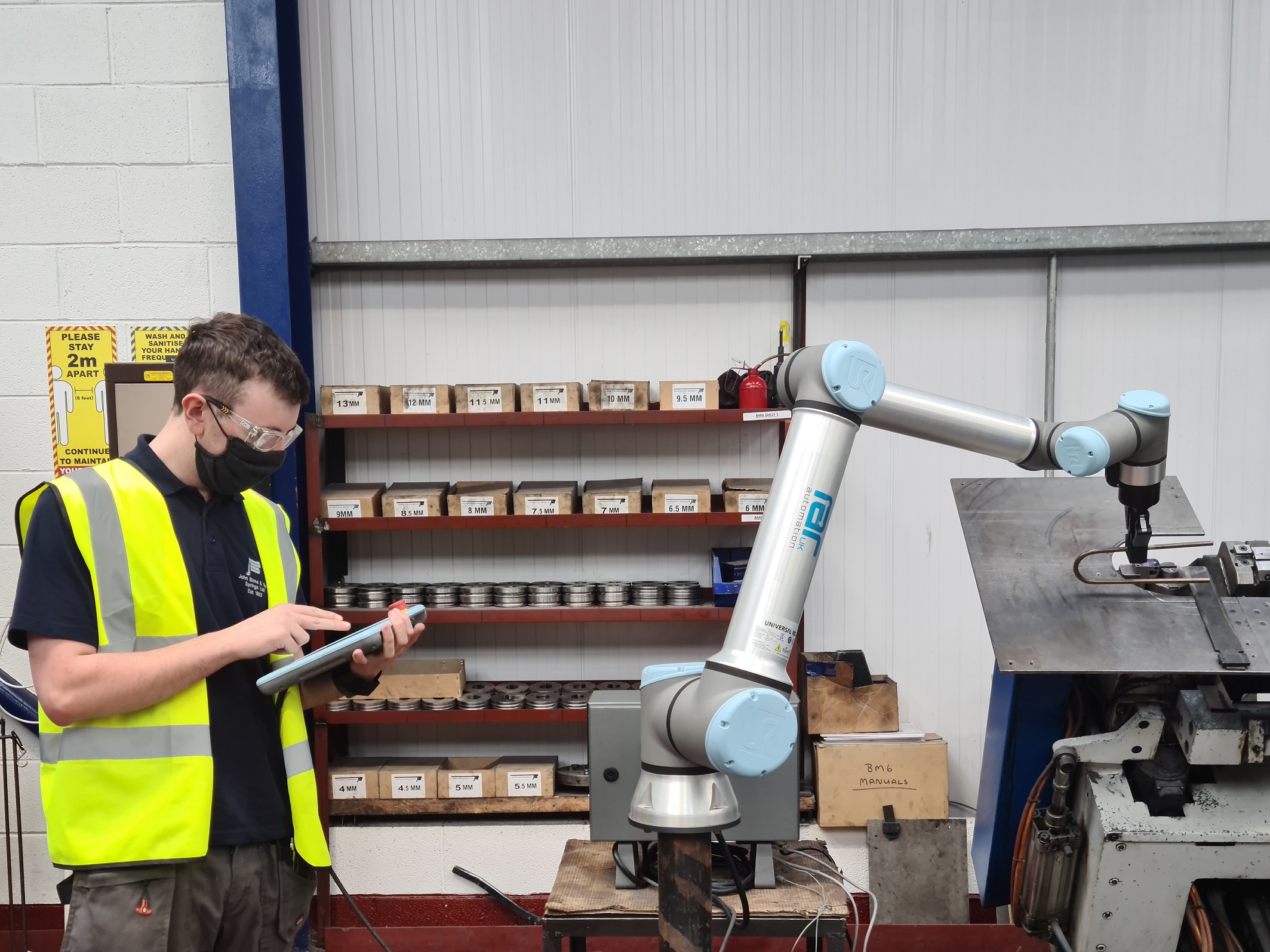 RARUK Automation is a dedicated automation company from RA Rodriguez that specialises in the supply of automation systems with a unique edge.

From our collaborative 6 axis robot through to linear axis and controls, or complete turnkey solutions, our product programme allows us to provide OEMs, systems integrators and manufacturers with automation products that can be flexibly combined to provide application-specific automated solutions.

Our experienced team operate from Shefford, Bedfordshire, where we have dedicated rooms for feasibility studies and training as well as a fully operational showroom. We are on hand to offer technical and commercial guidance and expertise to customers across the UK. Get in touch today to discuss your requirements.