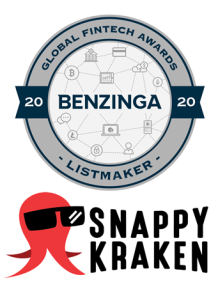 “Making the Benzinga list is a fantastic validation of the success and innovation provided by the Snappy Kraken platform,” said Snappy Kraken co-founder and CEO Robert Sofia. “Snappy Kraken has grown over 400% YTD in both advisor headcount and revenue during 2020 alone. More importantly, we’ve launched over 60,000 digital marketing campaigns for advisors in every part of the U.S. We’ve introduced over 1 million potential investors to advisors through digital channels, such as social media and online advertising. Our advisors get 410% better landing page conversion rates and 55% better email open rates than average.”

“Last year we did things a little different,” said Benzinga CEO Jason Raznick. “We launched the Benzinga Fintech Listmakers, an index of carefully-vetted companies and executives within ten fintech categories that are striving to revolutionize the industry as we know it, and it's returning once again for 2020. At the Benzinga Global Fintech Awards on November 10th, a virtual event powered by Envestnet | Yodlee, we’ll also recognize ten movers and shakers in the industry for innovative accomplishments in the space. We’re recognizing the companies that will define the future of our financial lives. Since the inaugural Benzinga Fintech Awards in 2015, our listmakers have closed $300 million in deals and partnered with some of the biggest players in the industry. We look forward to honoring these players for years to come, as well as finding the next generation of fintech."

Snappy Kraken provides marketing automation, online advertising, and bold, unique marketing for financial professionals. Each automated campaign on the Snappy Kraken platform is focused on achieving specific and trackable goals that grow business. All Snappy Kraken subscribers get access to on-demand videos, group workshops, and 1:1 calls with a Success Specialist who helps them set up, manage, and optimize their use of the platform through monthly performance check-ins. To learn more about Snappy Kraken's solutions for financial advisors, including white-labeled enterprise solutions, and to use the new and enhanced tools recently announced, visit www.SnappyKraken.com.

ABOUT BENZINGA AND THE FINTECH AWARDS

Benzinga is a dynamic and innovative financial media platform that empowers investors with high-quality, unique content with the goal of making information easier to consume. Benzinga’s mission is to connect the world with news, data and education that makes the path to financial prosperity easier for everyone, every day. Benzinga Fintech Awards is an exciting, forward-looking competition to highlight the companies and individuals with the most impressive technology, advancement and innovation who are building the future of financial services and capital markets. This year, Benzinga is proud to join forces with Envestnet | Yodlee to facilitate the most beneficial education and impactful networking in the quickly changing space. Learn more about the speakers and agenda for the event at www.benzinga.com/events/fintech-awards/ - agenda.