Winterwolf Press Releases a Timely, Historical Novel by Gunter Swoboda about Masculinity, Surfing and a Privileged Aristocrat Learning to Adapt, in Mountains of the Sea

LOS ANGELES, CA / AGILITYPR.NEWS / May 24, 2021 / Winterwolf Press announces the June 1st release of Gunter Swoboda’s historical novel Mountains of the Sea about walking a mile in others shoes and what it takes to really be a great man.

Mountains of the Sea is the first novel from Australian psychologist, speaker, mentor and podcast host, Gunter Swoboda. In the age of “Me Too” and “Times-Up, Swoboda weaves a story about a young man, Walter Beaumont, raised in privilege, but breaking out of the comfort zone and becoming something greater than himself.

The New York Time calls it, “Visually enticing, with a very masculine, but fractured lead character trying to find his way that many young men can relate too...the story arc's strong thematic and through-line keeps you engaged all the way to the last page."

The book is currently available for pre-order via most US retailers: Barnes and Noble, Amazon Books, Target and in Australia via Dymocks, BookTopia and then globally everywhere in paperback and eBook on June 1, 2021. 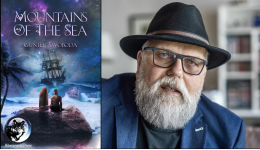 After accidentally shooting an army recruiter, Walter Beaumont is forced to flee England and finds himself on the HMS Resolution, Captain James Cook's ship of exploration to the South Seas. On board he befriends Omai, a Tahitian navigator who takes Walter under his wing. A fish out of water, Walter Beaumont struggles with the Spartan conditions of seafaring, eventually falling ill with consumption. James Cook, knowing that Walter would never survive the rigors of the Northern Pacific and the Bearing Straights, is forced to leave the young man and Omai behind in the newly discovered Hawaiian Islands. Recovering his health, his hopes of returning to England are shattered by the news that Captain Cook has been killed and the Resolution has returned to England without him.  Determined to make the most of his fate and intrigued by the Hawaiian culture and their close relationship with the ocean, Walter tries to adapt as best as he can. In a rite of passage that sees him transverse the globe and face the uncertainties of being a stranger in a strange land, Walter Beaumont well and truly rises to the challenge.  It is quite literally a watershed of epic proportions, where Beaumont faces the many moods of an ocean culture that is the center of the Hawaiian world. Together with his Tahitian friend, Omai, his teacher Kanoa, and his newly found love, Lani, he comes face to face with political intrigue, war, and the most enigmatic experience for an English aristocrat, that of riding the giant swells of Hawai'i.

“As I am a great believer in the power of storytelling. I wrote a book based on a young man finding himself in a strange culture and having to learn to adapt. Mountains of the Sea is a fish out water story that is all about personal growth and the importance of Emotional Intelligence.” States Gunter Swoboda.

While Mountains of the Sea is a historical novel, it is timely in that it touches on topics such as virulent masculinity and destructive behaviors among men. It will stimulate your mind, touch your heart, and inspire your soul.

"Mountains of the Sea is a heart-pounding journey...I got so involved in the struggles of Walter Beaumont's attempts to become accepted into the culture that I found myself feeling I was also in the story with him." - Angelo Thomas

Gunter Swoboda is a psychologist, speaker, author, mentor, coach and facilitator with over 30 years experience in counseling and organizational development. After more than 30 years experience Gunter’s passionate perspectives on what makes human beings thrive makes him a very insightful commentator and speaker. His aim is to stimulate your mind, touch your heart, and inspire your soul. Gunter’s passionate perspectives and scrutinies on what makes human beings thrive allows him to develop relationships with people in order to ignite their aspirations. Gunter is exceptional in facilitating outcomes in learning, productivity and communication by providing a safe environment with unobtrusive assistance and guidance wherein participants experience the flow between content and context. Swoboda is the creator of the Making Good Men Great movement along with his wife Lorin. He authored “Surfing the New Wave of Masculinity: Making Good Men Great.” Recently, Gunter is a Producer on Lifelines a film directed by Miranda Spigener-Sapon, Starring Lew Temple and Ross John Gosla that tackles mental health and bipolar/depression. His next book from Winterwolf is the sci-fi “Brian Poole Mysteries” trilogy. Gunter is also the writer/creator of the documentary feature, Masculinity That Inspires Change, on Amazon Prime and he’s currently in production on the limited documentary series, The Crisis of Man. Swoboda lives in Sydney, Australia with his wife Lorin Josephson.

Laura Cantu, President of Winterwolf Press says, “Mountains of the Sea by Gunter Swoboda is more than thrilling historical fiction, it’s also an inspiring adventure that reminds us of our potential to overcome any obstacle and rise to new heights. We couldn’t be more delighted to release Mountains of the Sea.”

Winterwolf Press is dedicated to publishing works that inspire their readers to remember the truth of who they truly are and aim to promote peace, joy, magic, and positivity in society’s creative consciousness and to be a counter voice against the all-too-common dystopian themes that run rampant in today’s entertainment. Winterwolf Press focuses on self-help and spiritual themes as well as children’s, middle-grade, and young adult genres. Winterwolf has a second imprint, Shadow Wolf, that isn’t afraid to explore darker themes and taboo subjects. The publisher firmly believes that we have a responsibility to contribute to the world’s wellbeing by cultivating and sharing stories, works, and ideas that create inspiration and empowerment in their readers as well as offer vibrational frequencies that promote balance and awareness. Winterwolf Press and Shadow Wolf strive to build honest, nurturing, and transparent relationships with their authors, peers, and audiences.